Organic ionic plastic crystals (OIPCs) attracted much interest recently for their potential application as solid electrolytes in electrochemical devices such as batteries, fuel cells, super-capacitors or sensors. Due to their good mechanical flexibility, chemical and thermal stability and good transport properties OIPCs are favored over ceramics or liquids for battery applications.1 Even more as the ion conductivity can increase by orders of magnitude with the addition of dopant ions such as Li+ or Na+.2 These fast ion conductors could make ideal electrolytes for Li+/Na+ batteries although their conductivity mechanism is not yet fully understood and still heavily investigated. 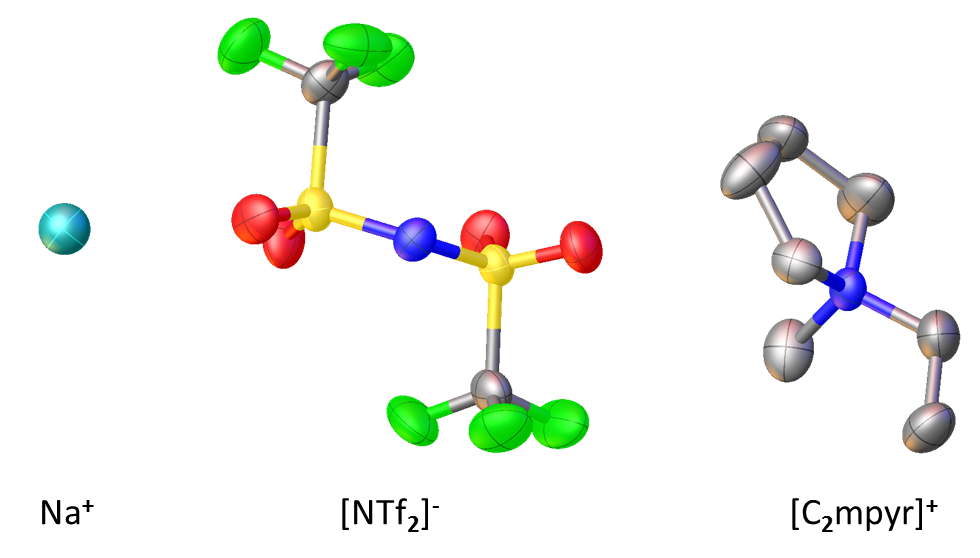 By adding Na+ the melting point at the eutectic composition is 30K lower and the ionic conductivity 3 orders of magnitude higher than in the pure [C2mpyr][NTf2].3  Combined with X-ray diffraction we used solid-state NMR spectroscopy to characterize the phase transition behavior and structural changes. Beneficially each component of the system could be monitored with a different NMR active nucleus. The cations were probed with 1H and 23Na experiments, the anion with 19F whereas the ratio of the different phases could be estimated via 13C {1H / 19F} CPMAS spectra. Additionally T1 measurements and MAS experiments in a temperature range from 253K up to 340K gave valuable information about the dynamics of each component in the different phases.